It’s May, and that means that it’s finally starting to feel like summer and it’s National Mediterranean Diet Month! What a great time of year to sing the praises of a lifestyle that has been shown to reduce the risk of chronic diseases and improve brainpower.

The Traditional Mediterranean Diet consists mainly of fruit and vegetables, whole grains, olive oil, fish, beans, nuts, herbs and spices, small amounts of dairy, and red wine (sounds a lot like what I recommend!). In 1993, Oldways, a Boston-based non-profit that develops consumer-friendly health-promotion tools including the Whole-Grain Stamp, introduced the Med Diet Pyramid. The pyramid was based on the dietary traditions of Greece and southern Italy when the rates of chronic disease were among the lowest in the world, and adult life expectancy was among the highest. The pyramid was updated in 2008 and is very much in line with the recently released 2010 Dietary Guidelines. 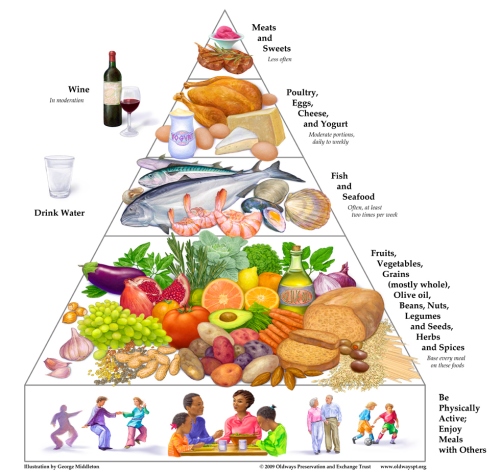 As you can see, physical activity and enjoying meals with others are the foundation of the pyramid, which shows just how important they are to a healthy lifestyle. Fruit, vegetables, whole grains, legumes and beans, olive oil, nuts, seeds, and herbs and spices take up the most space of the pyramid, indicating that the majority of your diet should include those foods (have you heard my tip about making half your plate fruits and vegetables?!). Next in line: fish and seafood, a group of foods that are also emphasized in the 2010 Dietary Guidelines. Poultry, eggs, cheese, and yogurt should be eaten in moderate portions, and meats and sweets are occasional treats. Check out the Oldways website to get a detailed list of foods consumed on the Mediterannean Diet and learn more about National Mediterranean Diet Month.

Over the next couple of days, Nutritioulicious intern Jo will be sharing some Mediterranean dishes she recently cooked up!

What are some of your favorite foods that fit the Mediterranean Diet?

Disclaimer: I was not paid to promote Oldways or the Mediterranean Diet. All opinions are my own.