My husband and I are pizza lovers. (Is there anyone who isn’t?!) In the past we would order in or go out for pizza, or occasionally we would enjoy a Kashi frozen pizza. But last December when I was testing recipes for We Can Cook, I made pizza at home and we really loved it. (The only other time I have ever made pizza at home is on Passover when I make matzo pizza.) Although I didn’t make the dough from scratch, it was still really fun to make the pizza – rolling out the dough, choosing the toppings, and seeing it turn into a delicious meal. Not to mention that it was so much cheaper than getting it ready made!

Last week when I made the cucumber soup I decided to make pizza to round out the meal. I had beautiful farm-fresh cherry tomatoes, basil, summer squash, and some leftover roasted broccoli on hand as toppings. I bought the whole wheat pizza dough from Trader Joe’s, divided it in two to make two pizzas, topped each crust with tomato sauce, part-skim shredded mozzarella cheese, and veggies, and watched it cook. Ten minutes later we had two Nutritioulicious pizzas (plus enough for lunch leftovers).

If you’re going out for pizza, be sure to check out my tips for how to make it a healthy slice!

Have you ever made pizza at home? What are your favorite pizza toppings?

As you may know from summer’s past, I love farm-fresh tomatoes. What I love even more is the simple yet nutritious and delicious combination of tomatoes and basil. Lucky for me I have both from my CSA this week, which makes me so happy! This afternoon as I was looking in my fridge and pantry for an afternoon snack, I thought “Why not make a little tomato and basil salad?” In less than three minutes I had this beautiful salad, which paired with some cheese made for a filling and balanced snack! 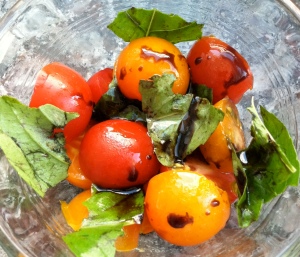 How good does that look?!

Looking for another tomato recipe? Try the Tomato Jam I made last fall.

Do you like tomatoes? What’s your favorite way to enjoy them?

A Round of Applause for Basil

On the fourth of July as I was ready to dig into the feast before me, my nose picked up on the scent of an earthy mint that was being emitted from the leaves of basil resting on top of freshly cut mozzarella. Not only is basil one highly aromatic herb and packed with flavor, but it also provides several nutritional benefits. Basil carries a number of B vitamins, which play a role in the body’s cell metabolism and energy production. Basil also contains important minerals, including magnesium, iron, and calcium. Last and definitely not least, basil contains volatile oils that aid in fighting against bacteria and inflammation. 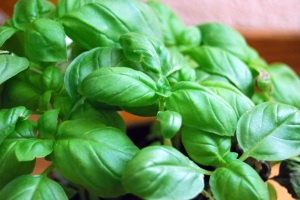 Basil isn’t just that smooth green leaf that you sometimes find as a garnish. It comes in several varieties, including some that are characterized by a purple color rather than green. If you’re looking to become a basil connoisseur or are just curious what to use the next time you cook, here is a list of the most common types of basil that are used in the kitchen:

Sweet basil – Sweet basil is by far the most commonly used and most popular type of basil. It is very prominent in Italian dishes such as on pizzas, used in salads, or prepared to create different sauces, including pesto.

Thai basil – As the name indicates Thai basil is mostly found in Thai or Vietnamese dishes. This type of basil is characterized by a licorice and mint flavor.

Lemon basil – It releases a very lemony scent and is found in dishes native to Thailand, Indonesia, and Laos.

Cinnamon basil – Due to the chemical cinnamate found in this particular type of basil, a strong cinnamon odor and taste can be expected from this basil. It is used mostly in hot drinks and added to fruits for a sweeter flavor. Cinnamon basil is recognizable by its purple flowers.

Basil is a versatile herb; if you’re looking for a way to incorporate basil into one of your meals try a mozzarella salad topped with basil or a homemade pesto sauce!

Do you like basil? How do you use basil in your kitchen?

As I mentioned yesterday, last weekend I made dinner using my CSA veggies. Included in the bundle were 3 ears of corn and some basil. I also saw grape tomatoes on sale at Fairway (my local, awesome supermarket!), and decided to make one of my favorite nutritious and delicious combinations: Grilled Corn, Basil, and Tomato Salad. 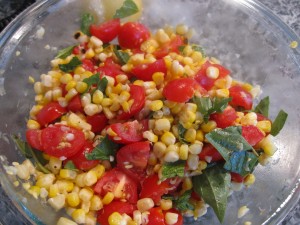 The dressing on this salad is very light to allow the flavors of the fresh ingredients to shine!

The truth about corn:

Corn gets a bad rap, but it actually has many nutritional benefits. Whole corn is a whole grain and a good source of dietary fiber, the B vitamins folate and thiamin, and antioxidants vitamin C and lutein.

Hopefully yesterday’s post, Nutritioulicious Cocktail Parties, got you in the mood to do some cooking or throw a party yourself! As I mentioned, it’s important to have a variety of hors d’oeuvres to serve in order to give your guests nutritional balance. And to make these nutritional bites delicious, it’s great to use seasonal ingredients when possible. Luckily, summer is a great season to throw a party! There is so much fresh, flavorful produce around, and it can really inspire you to make unique pairings, like these Watermelon-Feta-Tomato Skwers with Aged Balsamic. 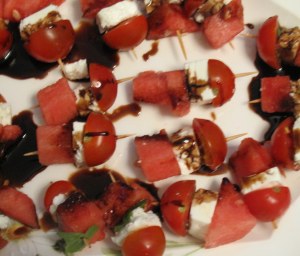 I’ll never forget the first time I had watermelon, tomatoes, feta cheese, and balsamic vinegar combined. It was at a NY City restaurant week lunch about 5 years ago, and it caught my eye right away because I love watermelon. The flavor combination was incredible. I decided to recreate this experience with bite sized hors d’oeuvres for the party using our CSA cherry tomatoes and basil.

These skewers are very simple to make, as you can see below. I have not included amounts for the ingredients because it all depends on how many people you are having over. You can get a general sense of size from the picture above.

Once again, this is a light and refreshing addition to the menu, that provides your guests with balanced nutrition: protein and healthy fat from the feta, and vitamins and minerals from the watermelon, tomatoes, and basil.

I am a huge fan of seasonal ingredients, and summer is by far my favorite time of year for fresh produce.  To me, there is nothing better than biting into a juicy, ripe nectarine and enjoying fresh berries at breakfast first thing in the morning.  When I lived in Murray Hill (for 7 years!), I used to go down to the Union Square Farmers Market multiple times a week to pick up my fruit and veggies.  It was definitely one of my favorite activities, especially on the weekends when there was the greatest selection.

When I moved in with my husband Andrew, I was sad to not have the Farmers Market so close by.  There is one near us, but it certainly does not have as much variety as the one downtown.  Lucky for us we were introduced to a gentleman who was starting a CSA – Community Supported Agriculture – bringing produce to the City fresh from his farm in Pennsylvania.  It didn’t take long for us to decide to join this group, and starting in June we began receiving weekly deliveries of the freshest farm ingredients: zucchini, garlic scapes, Swiss chard, heirloom sweet peppers, corn, black raspberries, apricots, and more.

Today I visited my sister in Union Square, my old farmers market stomping ground.  Knowing that I had just received fresh corn and green beans (among other things), I decided to see what else I could stock up on to make something delicious for a picnic we’re taking with friends tomorrow.  Normally I would go straight for tomatoes and basil – a great combo with corn – but unfortunately tomatoes aren’t really in season just yet.  Basil, however, was in full bloom at one of the stands, and it looked and smelled divine.  The aromas of fresh basil are one of the best summer smells of all time.  So I decided to make my corn salad, but with my green beans instead of tomatoes.  Here’s my recipe:

Hopefully our friends will enjoy the salad as much as I do.  If I were you, I’d get to a farmers market ASAP to reap the benefits of the summer harvest.  It is certainly nutritious and delicious, or as I like to say, Nutritioulicious!